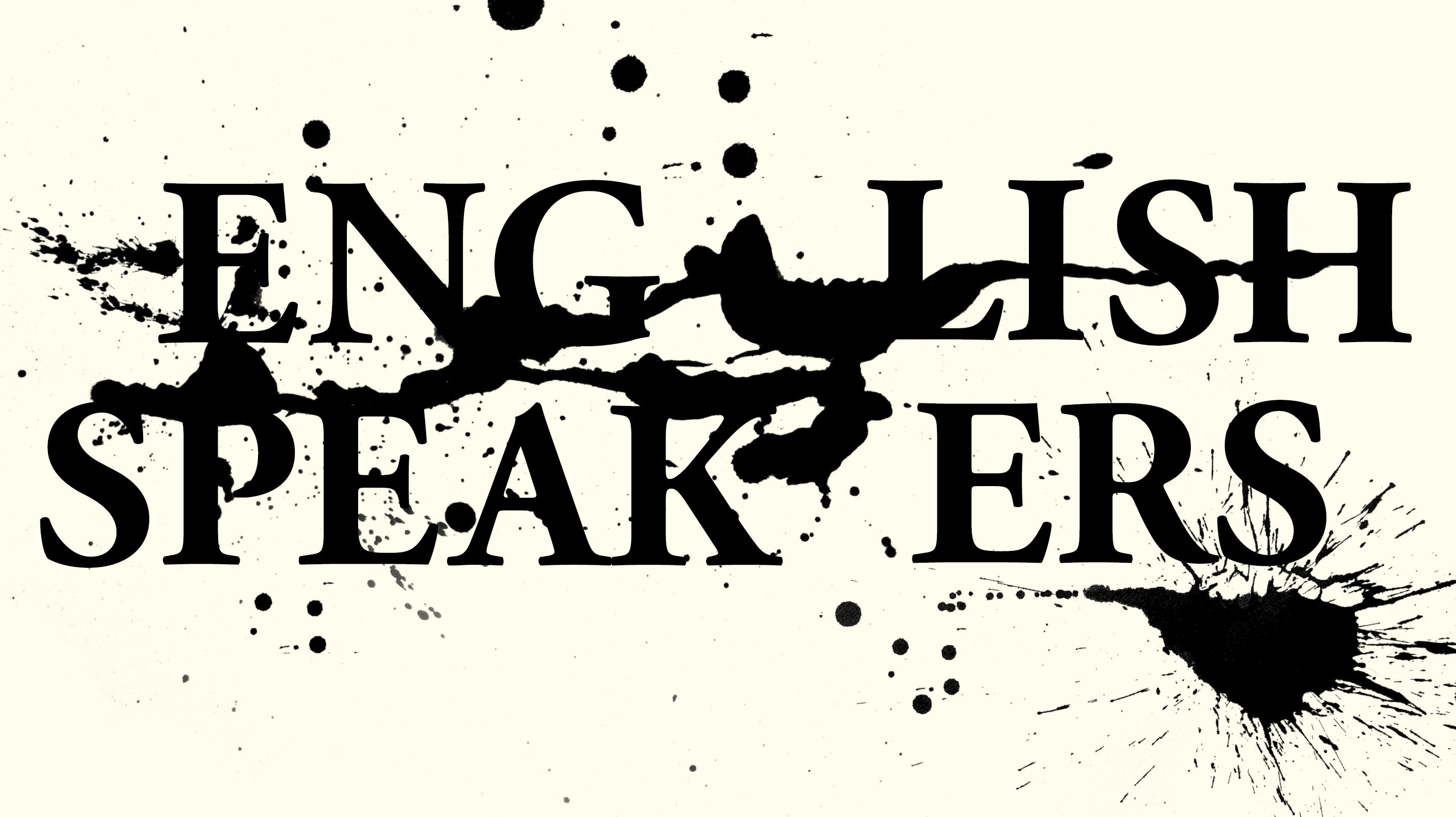 English Speakers is a sound performance about the English language, with manuscript and sound choreography by Sara Hamming and music-compositions by Anja Jacobsen and Lil Lacy.

English Speakers is a sonic performance that exploits the materiality of linguistic sound to make the struggle between etymological and grammatical conceptions of language tangible in a cluster of mythological tales of origin, influence, creation and destruction.

The massive pervasion of contemporary Scandinavian languages by English words, expressions and grammar has grown exponentially through the postwar era of American cultural dominance to virtually explode in last three decades – the age of internet. Many people even fear that it is threatening to swallow them all up over the course of the next generation. In a mythical, matriarchal, material, and humorously fierce tale the part-song part-speaking performance, both expands, complicates and reverses common conceptions about the linguistic imperialism of the English world language. 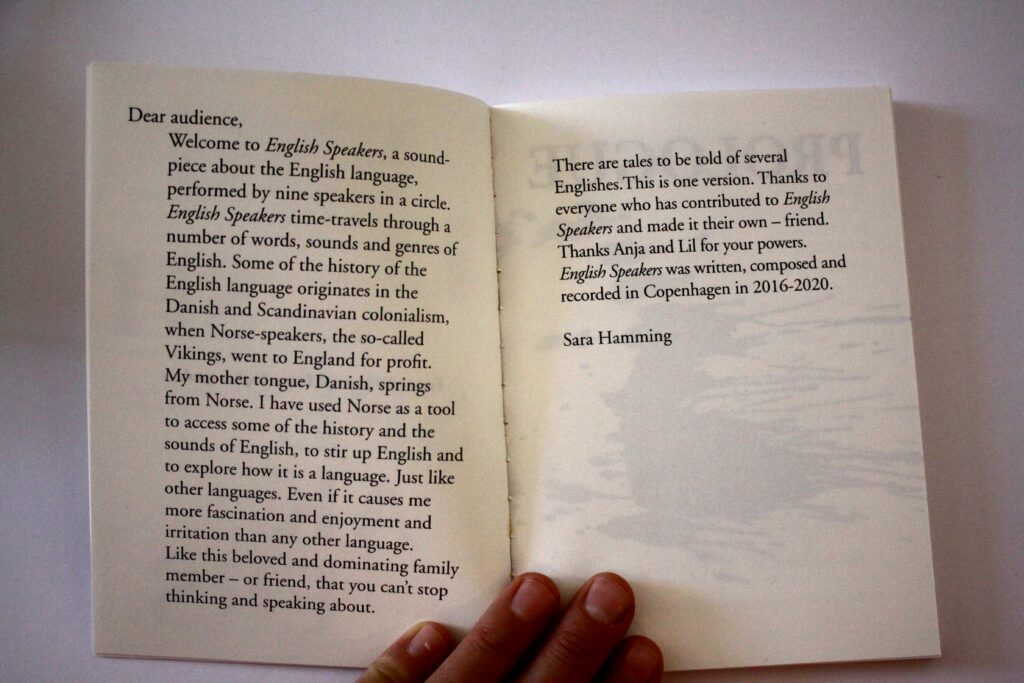 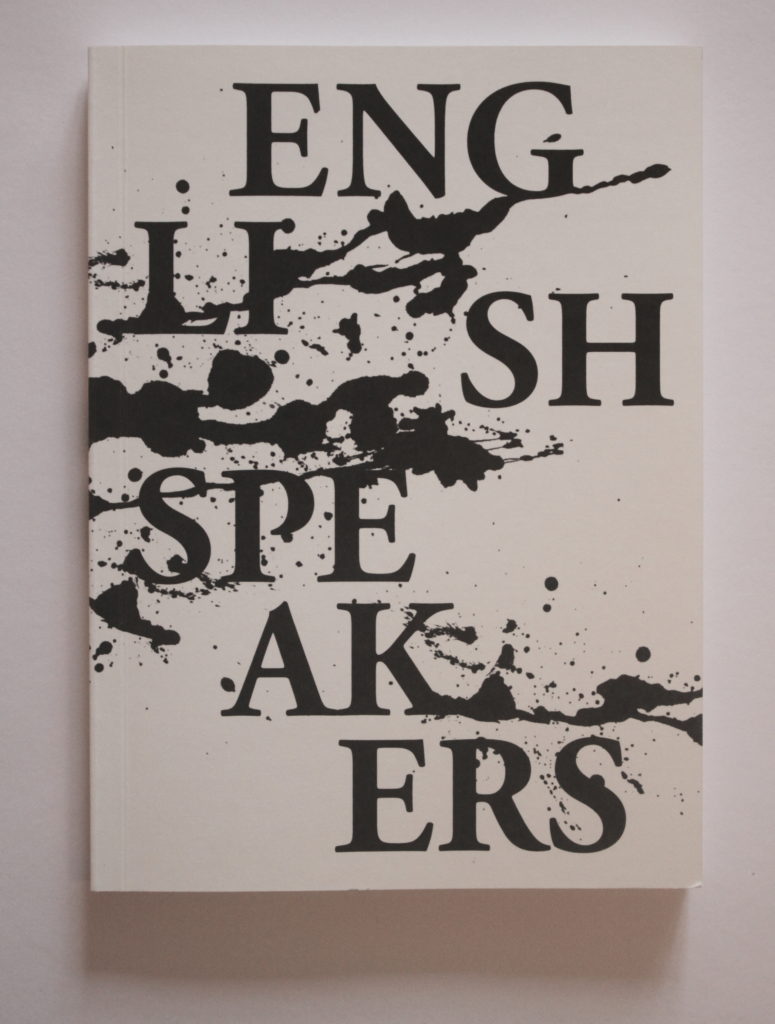 From a naked speaker we are addressed by a nameless narrator – a cross between an ancient seeress of Nordic mythology, an anarchistic philologist and a wise, willful and foul-mouthed woman of today – who takes us on an idiosyncratic journey through the intertwinements, cross-fertilizations and mutual aggressions of English and Scandinavian languages.

Assisted by nine other voices she knowingly traces the movements of sounds, words and structures flowing from Old Norse into Old English starting with the ships of the Northeners first crossing the sea to let their language contaminate that of the original settlers of the English coast, and lets her tale tap into the deep running streams that connect language to the fundamental sounds of the body moving through its surroundings.

The phonemes of the language are incarnated by the sounds of bodies breathing, eating, sighing, screaming, pushing, laughing and crying, as they collide with the sounds of the wind, the birds and the sea – or with the buzzing of internet data centers counting and calculating. And the complex ecology of world and word feeds back upon the speaker as language evidently shapes the identity, relations and perceptions of the voices that put it to use. But as the story progresses it is increasingly interrupted and disturbed by the other voices, by a rebellious chorus of girls, by the algorithmic language of Google and not least, by the narrator’s own forgetfulness.

English Speakers is a Moribund production
Co-producers: Notam – Norwegian centre for technology, art and music,
Inter Arts Center at The University of Lund in Malmö.